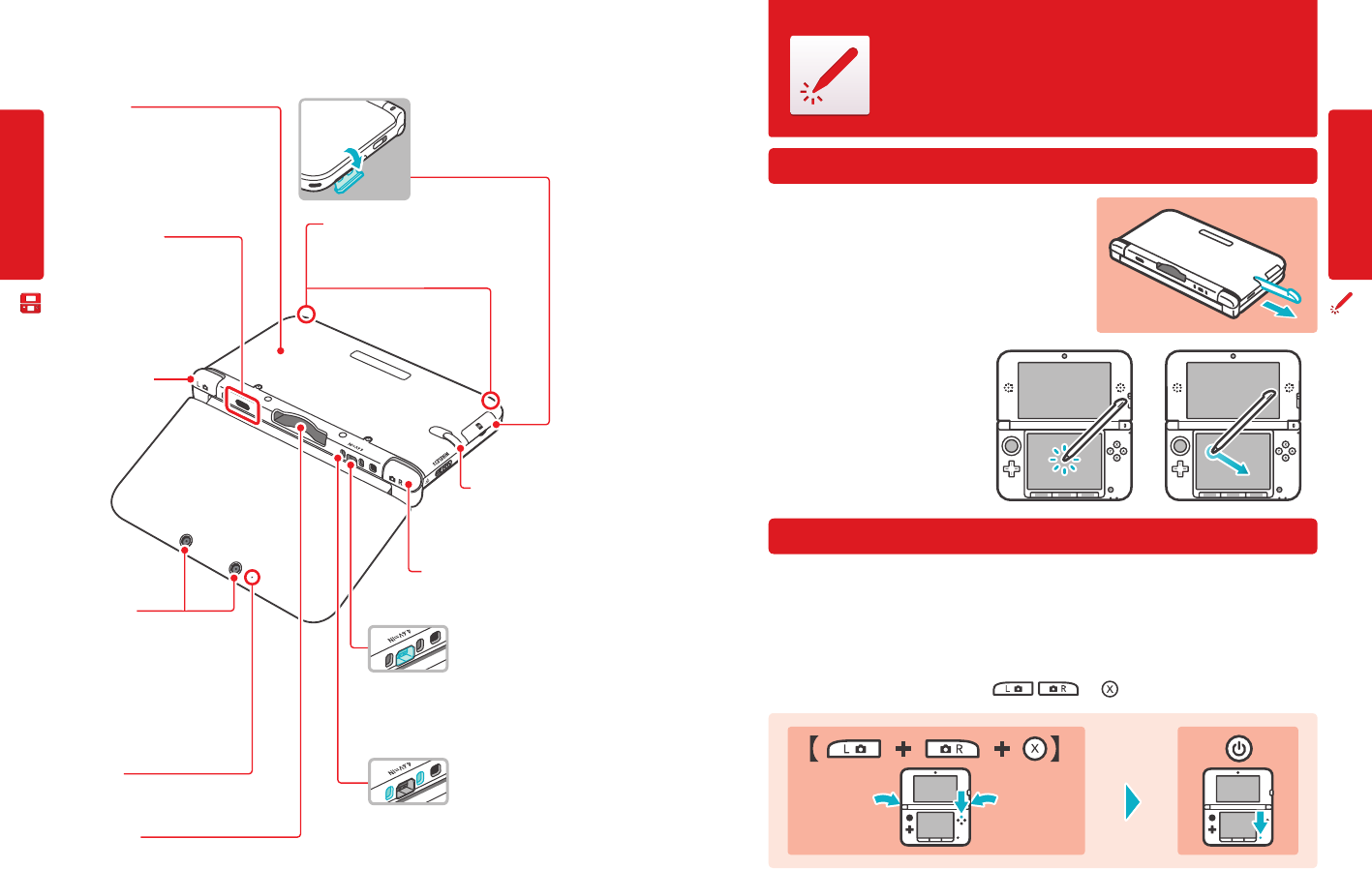 Basic Operations
14
Basic Operations
15
Using the Touch Screen and Stylus
Nintendo 3DS XL Components
Using the Touch Screen and Stylus
Using the stylus
Carefully remove the stylus from the stylus holder to use it. Insert the
stylus completely back into the stylus holder when your are not using it.
NOTE: To prevent damage to the Nintendo 3DS XL system, do not insert
anything other than a Nintendo 3DS XL licensed stylus into the stylus holder.
The lower LCD screen, or Touch Screen, is touch-
sensitive. For games that include this game control
feature, operate the screen by using the included
stylus. Lightly touch or slide the stylus across the
Touch Screen as shown at right.
Calibrating the Touch Screen
If the Touch Screen doesn’t seem to be responding properly...
NOTE: If the Touch Screen is not responding properly, rst try removing any screen protectors (sold separately) that
you may have added to your system.
Then you can try calibrating it from within System Settings, accessible from the HOME Menu (see page 75 for more information).
If you are unable to operate the HOME Menu successfully, use the following procedure to switch directly to the Touch Screen calibra-
tion screens. First turn the power o. Then hold down , , and and turn the system on as shown below.
While holding,
press
Stylus holder
Always replace the stylus into
the stylus holder after use
(see page 15).
Battery cover
Remove cover to replace the battery.
NOTE: Do not remove the cover unless you
need to replace the battery or check battery
installation.
Infrared transceiver
Sends and receives information when
using infrared communication.
L Button
R Button
Outer cameras
Used by games or other applications that
include camera features. Two cameras allow
you to take 3D photographs.
NOTE: Avoid getting the camera lenses
dirty. If they become dirty, wipe gently with
a soft cloth, being careful not to damage
the lenses.
Camera LED
Lights up when the outer
cameras are in use.
Game Card slot
For loading Nintendo 3DS Game Cards. Also compatible
with Nintendo DS and Nintendo DSi Game Cards.
SD Card slot
For inserting an SD or SDHC Card (see page 24).
Wrist strap attachment
For attachment of a licensed wrist strap
(sold separately).
AC adapter connector
Allows connection of the Nintendo 3DS AC adapter
(included), for recharging the battery or operation using
household current (see page 16).
Cradle connectors
Allows connection to the Nintendo 3DS XL charging
cradle (sold separately, see page 17).
previous next